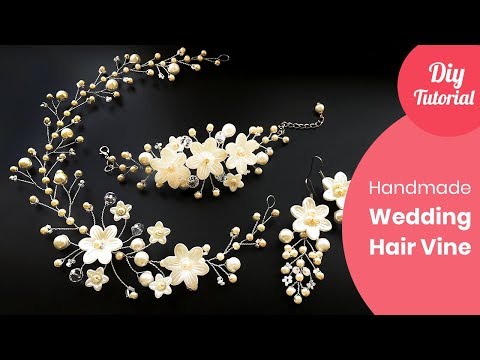 Hello my darlings, I am very glad to see you on my channel. Today we will make a simple hair accessory, namely a twig from wire, beads and flowers in beige-cream shades. At the first stage we need wire with a diameter of mm and 120 cm in length Bend it in half, and make a small loop in the middle by twisting the wires 1 cm down. It is necessary that the twig could be easily placed in hair with bobby pins. So, further I put a creamy small pearl on the wire from the right side and twist. Then I put on the same pearl and twist the wires a few times. After that I do the same thing with the left side … In the next twig I added two small beads and also twisted the wires keeping an equal distance between them. Then, I have collected a triple mini-twig, at first, I have twisted the wire with a large pearl by half, put a small bead on the same wire after that, I have connected two twigs by several turns and I added a twig with a small bead again.

We need to twist our ready three branches to the base down After that, I made another twig with the pearl and now we approached to the main details of the whole decoration As shown on the video, I have put an acrylic flower and a pearl, I have brought all of this to the base of the flower, I put one bead on and fasten tightly our element in the same place, as always about 1 cm down. I also continued to grow branches from the right and left sides. Moreover, I added a small flower to the composition, twisted it slightly away from the large flower After that I arranged a big pearl at the base.

The remaining branches I have collected in the same scheme, I hope you definitely will not get confused in the process of work!) At the second stage I already taken a wire of meters long, that is, twice as much as the previous one, I have also made a loop and collect a twig from two sides again. The sequence of elements is exactly the same as in the beginning, You can certainly replace materials add more colors, or make a pearl thread only, of course, in this case you can use many options. You can also take a long wire, Then your twig will be suitable for Braiding in long hair, for more complex and voluminous hairstyles. So, my long part of the twig grew to 25 centimeters, this is enough for my model Further I have put a large pearl on two wires and I have passed the tips of the wires of another twig into it thereby connecting them together. I have securely fixed the wires near the bead on both sides. The remaining wires I didn`t cut, and also formed twigs to fill the void in place of joining of the main branches and to make the composition complete.

Well, my girls, thank you, that you watched this video, as always I will be glad to read your comments, if you liked this video, put your thumbs up, send your works, if you are on my channel at the first time, subscribe to it, so as won`t to miss anything! See you again in Gilda’s Workshop, bye-bye! .